Not the board game…take this quiz and find out if your life is worth living heeheehee. 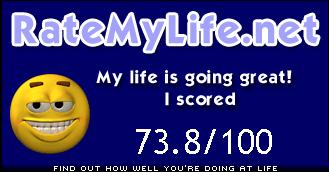 Find out if you suck at life

To lose a pound of weight, you need to create a deficit of about 3,500 calories with diet and exercise.

To lose a pound of fat, you need to balance your personal body scale by taking in fewer calories and doing more activity. The best weight-loss program will show you how to do both. At eDiets, we help you lose the weight by adopting a healthy lifestyle, so you can maintain your weight loss permanently. Aim for one to two pounds of weight loss weekly. You may lose more in the initial weeks as your body adjusts to your new meal plan and activity. Your scale is not always the best indicator of your progress — if you add weights to your workout, you can actually transform your body to a more muscular and fit you.

Full article of myths and facts at Diet and Nutrition Information at eDiets.com.

To make it simple, that translates to cutting 500 calories a day through your diet AND/OR workout, to lose a pound in a week on a 2,000 calorie diet. In my world my calorie intake is less, but I know still that this means only now am I close to that high goal. And that’s okay, and very informational. After learning more and more, I’m no proponent of anyone doing anything for a quick fix or to get skinny, but have learned it’s really all about changing your lifestyle. Personally I know limiting any sort of eating out to once in a blue moon has had a huge impact.

HumanForSale.com - For sale by owner!

I bet that you are curious, go ahead, click the link. Think you’re worth as much as (or more than) me? It’s a pretty interesting site, they explain how they compute your ‘worth”.

Let me know in the comments…

This is not exactly zombie related, per say, but since I use zombies to discuss anything strange and unusual, and believe them to be far more likely than aliens or nuclear war, I’d say this is a great list to know about no matter what you’re worried about. It’s the stuff you need in your bomb shelter:

Top 100 Items to Disappear In a Disaster.

You remember last week I was losing sleep over this little party. It was fine. If not terribly exciting. It did get pretty busy and we met the nice guy who for some reason seemed excited about being the social chair for the building, and also was very excited about yoga. And getting me to do yoga.

We met a firefighter who helped fight those Australian fires, which was neat. We saw two people we knew, and time flew by. I had left dinner in the oven (good escape plan) and we were done in a little over an hour and a half, full of other people’s wine that was better than what we brought (also a good plan).

The strangest thing to me about the event was that before anyone would really talk to you, they wanted to know what floor you were on. They would point to other people also on your floor that they’d met, as if that is cause for celebration and best friendships. I’m the type that doesn’t really want people to know where I’m at in case I’m doing something that’s bothersome or that I shouldn’t be…
It was a very nice party and kept with my favorite thing to do around here, meet people I’ve absolutely nothing in common with and let them talk.

That isn’t really the tagline, of course. I think it should be. The paper and friends were abuzz with this thing. I swear to you, they said 450,000 people go over the two days. We even saw a friend walking down the street headed there, who urged us to get there asap. We had been ambivalent but decided to see what the deal was. The second day we headed over early to not have to fight the masses.

What does it sound like to you? Good food? Gourmet perhaps? Free samples? Tasty treats to help you learn about the city? That’s what we thought. None of the above. It was really another street fair, with the same soy candle and sarong stands you see at those sort of things.

We were shocked. It was the same garbage as every other place, with the exception of Serious Pie, the VIP pizza place we’ve enjoyed. So we wandered for maybe 45 minutes – it was big – got some free Mentos, and walked back home laughing. Every morsel there, no of which were free, was probably the future cause of someone’s heart attack. MK noted how he doesn’t understand why we wonder where obesity comes from. Everyone was pigging out like there was no tomorrow. Junk food everywhere. Rows and rows. Just not for us.

See the pages for the information, if you’re a blogger. If you’re not, feel free to add your five in a comment.

Five Classic Board Games I Love:

A pregnant woman is in a car accident and falls into a deep coma. Asleep for nearly six months, she wakes up and sees that she is no longer pregnant. Frantically, she asks the doctor about her baby. The doctor replies, “Ma’am, you had twins! A boy and a girl. The babies are fine. Your brother came in and named them.” The woman thinks to herself, “Oh no, not my brother, he’s an idiot!”
Expecting the worst, she asks the doctor, “Well, what’s the girl’s name?”
“Denise,” says the doctor.
The new mother thinks, “Wow, that’s not a bad name! I guess I was wrong
about my brother. I like Denise!” Then she asks the doctor, “What’s the boy’s name?”
The doctor replies, “Denephew.”

Monday night I went out. Against my better half’s wishes. Teehee, I’ll be fine, it’s just girls night, I thought. But even though I refrained from going crazy, and MW had me home and ready for bed by 10, I had the hardest time in the universe getting up at 4am. But I made it, somehow, to the car, and promptly fell back asleep. An hour and a half later, I somehow made it from the car to the upper deck of the ferry, and fell asleep for another hour and a half. But MK took pictures. So you see more than I did.

Here are the pictures.

THE MAUSOLEUM(scroll halfway down for story).

We drove a bit and stopped in Roche Harbor. I think it was beautiful, but since I was already in trouble for being so sleepy, my nose decided to bleed profusely for an hour just to please my husband. I missed a little of that too.

Moving right along, we go to various spots around the coast of the island to see the views, and hike. We stop at the viewpoint where you see orca whales. We’re too impatient. We called it good at ‘eagle’. MK got a great pic of it. We drove back through a few more stops and a lavender farm, which was all the island, and we headed back to port, Friday Harbor.

The little town was busy busy, most likely with tourists ready to go back where ever they came from. It was just that kind of an island. Done by two, ferry at six…unless you waited 4 hours for the whales.

The only thing to do in town, and the thing we were the only people NOT doing, is eat ice cream. We looked at the boats and wandered as slow as possible to kill time before the ferry, weaving in and out of stores and treacherous ice cream dangling children. And adults. I don’t even like ice cream and was really nervous that it was mandatory and we might receive a fine if we weren’t careful…

The ferry had cars pull in backwards, which I thought was neat since I couldn’t have done it.