Well, at least that’s what I’ve spent a long time thinking. It’s so trendy, it’ll stop being trendy and then everyone will laugh about their “yoga phases” and their “skinny jeans” in the same story.

But now I’m not so sure. I’ve been told even ‘real’ athletes are giving this a go. Musicians, too. So they can breathe better. I have trouble with that sometimes. A sale convinced me 10$ could be spent on the mat. Now what to do with it…

Classes are tricky, because I don’t want to be the only one that doesn’t know what is going on. And I don’t want to accidentally go to the sweaty one, eew. And some people don’t wear their shoes, and I am afraid of saying something out loud about their yucky feet.

So I found this site called iyogalife.com. It lists all the poses and gives you great tips and advice and stories with a very down to earth flavor. I like it when you make fun of the weirdos too. I can’t do things by reading written instructions, so I’m excited that there are videos. (Click the logo for a sample). So I’ll let you know how it goes, right now I’m mostly just thinking about it. I’ll get there.

*Side note: I also opted to add Fish Oil (Omega3) pills to my diet. If you think fish is gross like I do, eat something when you take these very necessary vitamins. Or you will burp fish oil. Bleh.

Stolen utterly completely, but full of laughs and worth sharing.
Link to original post.

President George W. (Dubya) Bush will be delivering his State of the Union Address this Monday Night, January 28th, 2008 at 9pm EST.Unlike last year, there is some cause for celebration as this will be the last address Dubya will deliver as President. Still, he has plenty of time to muck things up, so with equal parts fear and joy, the only way to get through this is to drink up!Those who got drunk with me last year will notice a return of many of last year’s favorite rules, but stay focused, there’s much CHANGE from last year, and remember, folks, we all love the buzzword of CHANGE!

Here are the rules for
The State of the Union Drinking Game, version 2008, Last Year of the Dubya:

-Dubya mentions “The Surge” and how it’s working in Iraq.

-Dubya mentions the need to keep long-term military operations in Iraq and/or Afghanistan.

-Dubya mentions Iran, Pakistan, or North Korea in or out of the context of talking about “nukes”.

-Dubya talks about the “Stimulus Package” that will help keep the economy from slipping into recession.

-Dubya squints really hard, furrows his brow, purses his lips, and looks like a chimpanzee.

-Dubya butchers the English language with the mispronunciation of a big word, the missuse of a commonly used word, or the creation of a word that did not previously exist.

-They cut to a shot of Hillary Clinton folding her arms, looking constipated, and even more pissed than when Bill said, “I did not have sexual relations with that woman, Ms. Lewinsky.”

-They cut to a shot of Barack Obama looking thoughtful, pensive, and confident.

-They cut to a shot of Condaleeza Rice clapping like the lap dog she is.

-Nancy Pelosi (in the background sitting behind the President) looks very stiff and bug-eyed as she tries to hold back a massive attack of “head shaking” and “oh, no he didn’t” gazes.

-Nancy Pelosi blinks. (You’ll be drunk before Dubya even opens his mouth.)

-Dick Cheney (also in his place sitting behind the President) appears to be leaning too far to one side and is about to topple over in a heart attack or strain from an evil grimace.

-The Republican (and still minority) side of the House gives Dubya a completely unwarranted standing ovation.

*Surgeon General’s Warning: If you drink too much, you may find yourself in a coma and not awake until 2009 when a Democrat is back in the White House.

Total, after this week, I have skied six or seven days in three places (Steamboat, Breckenridge, Park City) all in the last 5 years. I am therefore what you would consider an expert. So here’s a few observations I made: 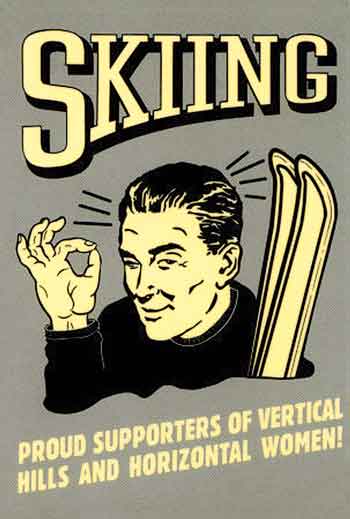 The BlogNinjas are back for 2008. After pigging out and holiday carousing we had to hit the dojo for some serious training but now we’re ready to carry on kicking ass like only we can. If you’re not a Blog Ninja yet why not make it your New Year’s resolution? Sign up here for your complimentary shuriken. Uniform not provided.

Here’s topic #6:
What song transports you through space and time, and where do you go?

The idea here is that we’re all getting older, and there’s that tune that was playing that one time, and now when it comes on the radio you immediately are back in that place. It’s nearly impossible for me to pick just one song. I am so into music that I have a soundtrack for every part of my life. It would run pages. I usually don’t remember where I am when I first hear a song, but I can be transported through my memory fairly easily.
Collective Soul = the summer my brother and I lounged in the basement playing cards.
Massive Attack = the first summer I spent away from home.
Pink Floyd = Dad showing me “The Wall”.
Counting Crows = high school.
Illinois = SXSW 07.
Pete Yorn = meeting my husband.

Most recently, “Hands Open” by Snow Patrol was playing from my mp3s when I finished my first book. To keep the tradition, I played it as I crossed the finish line with my second too. No matter what happens, whenever that song pops up, I will be filled with a great sense of accomplishment and pride. Music is in our lives to associate with experience. I have a great soundtrack.

Please visit the Mystery Topic Challenge Blog to view all of the other entries. Once you’ve read them all, please be sure to vote HERE in the Sidebar for your favorite.

Five Things That Shouldn’t Go Wrong On Your Birthday:

Cry me a river, right? This birthday is stupid.

There are a lot of good blogs out there. So many, in fact, they were cluttering up the sidebar that none of you look at anyway. In case you missed it, I’m announcing formally that I’ve moved the BLOGROLL to the tab in the header (the thing at the top of the page) called “Best Bloggers“. Click that and you’ll be taken to a very special page with all the links to all my online buddies (really, I practially know these people). So, if it’s a somegoslowly kind of a day over here, you can peruse more of the internets! I’m subscribed to all of them, so you should be too! Just don’t break up with me for any of them, or I’ll cry.

I’m so glad that we all agree that I shouldn’t be expected to make the book “work”. That is surely someone else’s job. Someone that won’t change each little thing and over-analyze, like I have been. I’ve done the hard part. I made some stuff up and put it ‘on paper’. Now to find an editor. The going rate appears to be a penny a word. It’s abstract accounting at best. Will there be more or less words when all is said and done? What if there’s a typo that makes one word two? Who are these people anyway? Am I going for quality or content? I can’t be over 60,000 words, so the price seems reasonable considering I don’t even know what I’ll get in return. What an adventure!

Next, submitting to publishers. There are a lot of little publishers. I’m going to try ‘going local’ first. Always a camaraderie-type thing. If no one in San Diego wants me, I can pretend I am local “Seattle” where I was working on the editing, or local “Austin” where I wrote the first book. Most publishers that I’ve found will accept a synopsis via email, which apparently is unusual? I’ll take it. My goal is to start finding them and getting myself out there. I think I know how to sell, but this is different, it’s personal. I think having a place to ask for help (here) and admit that I’m lost is a great big help.

There are a couple reasons I’m waiting to explore self publishing. One is the husband, who takes the doing it myself idea as a last resort that is only acceptable if no one else wants my book (in my mind in that case why bother…). It’s going to cost more, of course, since I would want to use every resource they offer to give myself a best chance, and so few books make it big that go that way, and I’m sitting here thinking I have something good to work with.