This is out of order but we also did the trim and finished the Utility Room. MK stole some of my pictures so I unveiled the guest room first. I think the funniest thing about the trim was that for the living room we literally pulled it off the wall, primed it, painted it, and stuck it back on. It’s a little loose but it worked. They don’t show you that on TV.

In reality, you have a room where you’ve trashed the trim, like our Utility Room. I’m not sure what else to call it, it’s a huge storage room really, the guy that lived here before us used it as an in-house work room. We cleaned it thoroughly and painted it. It’s nice enough to sleep in now. Not having an in-house work room meant that after a week of sitting in my dining room the trim had to be cut outside. Brr.

MK’s work space on the back deck was hilarious: 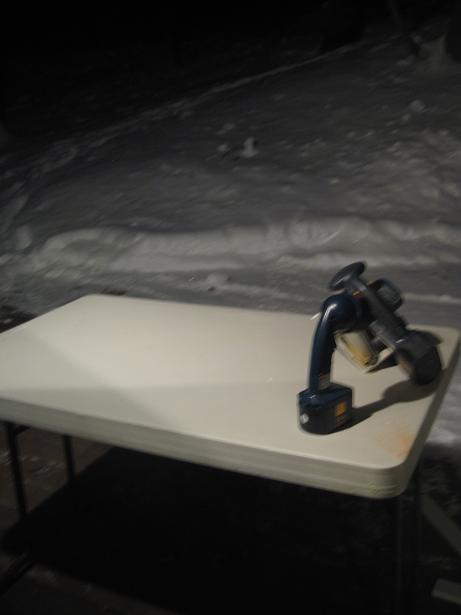 We sectioned out the new wood trim we’d picked out, measured it, found studs (well, I was in charge of finding them and I missed one, so we found MOST of the studs) and measured where to cut the wood. As I think I mentioned, I wouldn’t let MK spring the 400$ or whatever for the nail gun and air compressor after reading it’s perfectly do-able by hand. So we drilled holes, sunk nails, and realized the nails weren’t long enough. MK ran to the store for some enormous nails. We also realized that the room is right on the intersection of concrete becoming pier-and-beam so it was a little crooked. Oh well. We made the wood fit, put wood putty over the nail head holes, and filled the seams with sealer. It was hard work since the laundry main goes through the floor in one spot (hoping FIL can put my laundry IN this room when he visits): 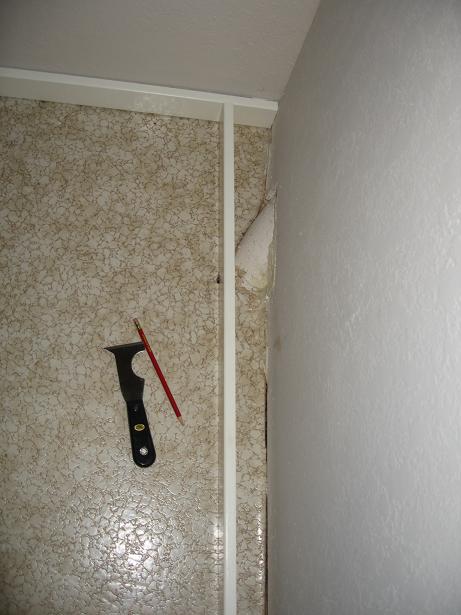 But overall we think we did okay. As you can see the floor isn’t that great, so I decided to roll out a rug we weren’t going to use. Made the space much happier. There’s enough room that I’ve kind of been using the space as a workout room too, and it otherwise holds crap, paint, and the ironing board I hope I never have to look for.