Here’s what I want to do –  I want to remember this trip forever. I’m going to give it my all (of as much all is left) and give you my in detail play-by-play, and also some thoughts on the SXSW Music Festival over all. I couldn’t have met better people, seen better shows, and enjoyed thinking about the past years and how the event – and my experience of it – has evolved.

PS – as always you can click on pictures to enlarge.

Nothing is better than getting picked up from the airport and heading straight to a show. I arrived Wednesday and did just that. I also love how easy the Austin airport is, and how music greets you as soon as you arrive in the city.

We met up with some of KDs coolest, smartest, most music savvy friends and saw The Friendly Fires and Foster the People, both some big buzz bands this year. They were great! The party was hosted by (aka there was free) Sailor Jerry’s at Shangri la, it was my first time at the venue. 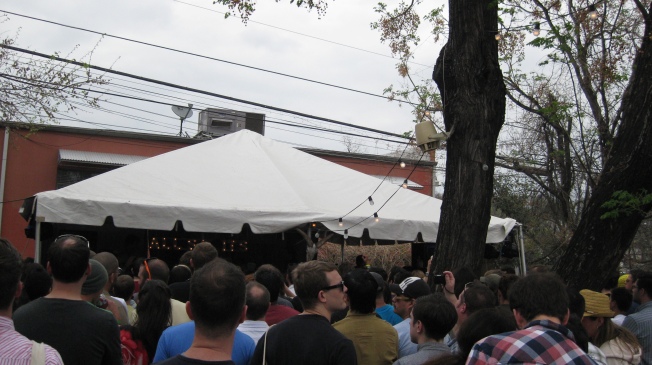 Mount Kimbie came on before Theophilus London but it was just too odd listening to dubstep/techno/band that early in the day (would have prolly been a blast later at night) and we moved on.

The thing for me has always been happily following the crowd and checking out new acts. I saw a little bit of music that I wasn’t all that interested in, but at least now I know! I also know my taste is hardly anyone else’s – and that other people are way better at the observing/comparing method of explaining music. I’d really rather name the bands and let you look them up and decide for yourself.

The band Bikini at the ND Studios party was great, if there was a mute button for the lead singer. We all agreed. Someone should call him and let him know. Gently of course.

After grabbing some delicious Tex Mex – food and a minute to rehab is so important – we went back out and picked up our wristbands. I love how that gets easier every year, the official arm of SXSW does a great job getting everyone organized and on top of things for that one part of the experience.

We then saw an official showcase of bands I happen to really like but not know anyone that also likes these bands: A Place to Bury Strangers and She Wants Revenge. The band Black Cherry opened. They sounded like they were still working out the kinks of who they are but had a great sound. I’m sure the lead singer is a distant cousin of Tricky. If we say it enough it’ll be true. I didn’t find the band Cruel Black Dove memorable. APTBS was loud. Hella loud. Ear bleeding wish I had ear plugs loud. But good. Seeing them that first night must have been key, as reviews that followed were not very friendly.

And this happened too.

I have to tell you that if nothing was stopping me I’d move in to a condo back in downtown Austin in 30 seconds. At least for a while. I can’t believe how much I love and have missed this city!

BEST OF TIMES: Didn’t wait in any lines.

WORST OF TIMES: Trying to decide how to move back to Austin.

Tweet(s) from that day:

Comment: Yes, the guy’s shirt says “Cocaine”. I think the bottom of it said “And hos”, too. Rock star.